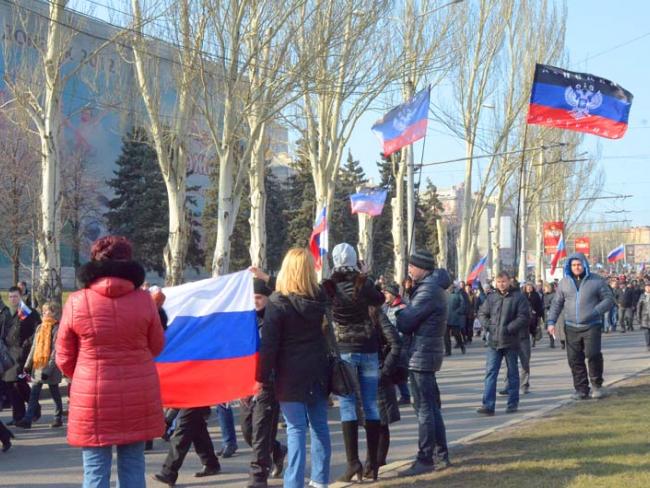 The agreement’s terms included “Withdrawal of all foreign armed groups, weapons and mercenaries from Ukrainian territory”. In direct violation of this, the US government announced in late February that it would send 300 troops to Ukraine to help train Ukraine’s forces, and Cameron announced on 24 February that 75 British troops would also be sent to help train Ukraine’s forces.

Articles on the Ukraine routinely refer to opponents of the Kiev regime as “Russian separatists”. But who is calling for separation? The Minsk Agreement, signed on 12 February by the governments of Ukraine, Russia, Germany and France, and now approved by the UN Security Council, doesn’t.

On the contrary, the Minsk Agreement calls for constitutional reform in Ukraine and a new constitution by the end of 2015, a key element of which will be decentralisation, not separation.

A declaration of Ukrainian non-alignment as part of an internationally negotiated settlement, and UN Security Council guarantees of that status, would bring instant de-escalation and make a lasting ceasefire possible in eastern Ukraine.

But led by the US, NATO continues its march to the east. It aims to seize control of Ukraine, to complete the hostile line of armed nations to Russia’s west. One of its strategies in this is to seek to draw Russia into a “prolonged and costly” war in Ukraine.

That strategy was outlined by former US National Security Advisor Zbigniew Brzezinski last year at the Wilson Center in Washington. It’s one of Brzezinski’s favourites, used by him in the 1980s when he armed Islamic fundamentalists in Afghanistan as part of a proxy war against the Soviet Union – and look what happened there. Left to the US, Ukraine would become another wasteland of death and destruction, with the constant risk of a wider war, and Russia would descend into chaos.

The war drums keep beating. At a press conference at the Munich Security Conference on 7 February US Air Force General Philip Breedlove, the head of both the US European Command and NATO in Europe, insisted that NATO could not “preclude out of hand the possibility of the military option” in Ukraine.

Inside the conference, Republican senators John McCain and Lindsay Graham rubbished European negotiations with Russian President Vladimir Putin. McCain summed up Merkel’s speech at Munich, which included a statement of opposition to arming Ukraine, with one word: “foolishness”.

‘Some in Britain offer their own self-serving support.’

And some in Britain offer their own self-serving support. Writing in the Guardian on 1 February, Timothy Garton Ash, Professor of European Studies at Oxford University, called for war: “Putin must be stopped. And sometimes only guns can stop guns.”

But there are sensible voices, too. Matthew Parris wrote in The Times on 28 February: “Ukraine? With an inward groan, I write again what I wrote about Saddam’s Iraq, about Gaddafi’s Libya and about Assad’s Syria. Intervention almost always makes things worse.”

Meanwhile, the Pentagon’s 2016 budget proposal asks for $168 million of extra funding to “counter Russian aggressive acts”, with $117 million for Ukraine and $51 million for Moldova and Georgia, plus $789 million to bolster NATO in the European Union.