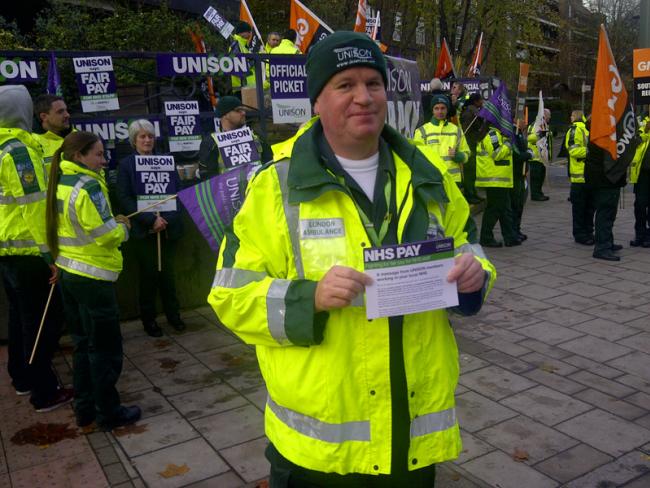 Ambulance employers have given way and agreed to the unions’ demand that paramedics be upgraded (from pay band 5 to 6). The upgrading is the result of a two-year national negotiation – though like all advances, whether health and safety legislation or the eradication of unpaid overtime, it will only happen in practice through the pressure applied by organised workers

It’s the latest victory in a history of organisation spanning decades. For many years ambulance workers were described as providers of a “Cinderella service”.

Despite Thatcher’s Health Secretary’s attempts to describe them merely as “ambulance drivers” during their heroic strikes of 1989/90, services across the country remain some of the best organised. In London between 80 and 90 percent of the workforce are unionised, rising to close to 100 per cent in many ambulance stations.

Just over ten years ago a breakthrough was achieved with the fight for a new national NHS pay system, known as Agenda for Change, led nationally by Unison, to which most ambulance workers belong. This took ambulance workers into the ranks of the best paid manual workers, although like most such workers, they are “brain workers” too.

The struggle for improvement has continued, especially in London, where the “London package”’ of measures was pioneered by Unison’s late-lamented Branch Secretary, and also Unison President, Eric Roberts.

Employers have consistently argued that they are underfunded. They have a point. Paying Band 6 will put pressure on finances which can only be relieved by the release of further resources from an unwilling government. In this struggle, too, organisation and clarity will be key.

In these days when workers are increasingly subject to fascist armed attacks by religious obscurantists, the role of ambulance and other emergency services is thrown into sharp relief. We should all be grateful that they are so well organised, and that their unions maintain vigilance and purpose in negotiations local and national. We can aid them by applying the same qualities wherever we work.