What is working class democracy? 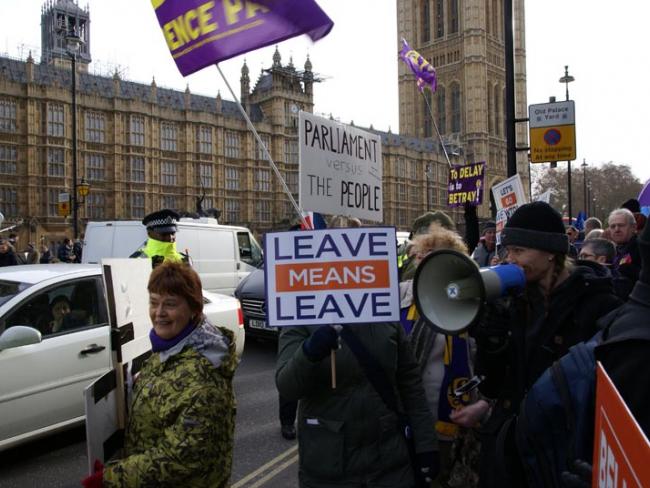 Parliament vs the people: during the Brexit fight Westminster was the centre of anti-democratic schemes to overturn the will of the British people. Photo Workers.

Democracy literally means “rule by the people”. That’s not what our current parliamentary democracy does. It’s not fit for purpose and it does not represent the people of Britain…

We’ve seen plenty of the opposite of democracy with the constant attempts of MPs and others to overturn the Brexit referendum result and keep Britain tied to the EU. Also the on-going attempts to break up Britain despite the 2014 Scottish referendum No result.

And we’ve seen it again with more recent government actions such as the deployment of 8,000 British troops and dozens of tanks in Eastern Europe over the summer of 2022. British workers have had no say over involvement in Ukraine. It does not serve the needs of the British people. It was not the result of democracy. Quite the opposite.

Are these aberrations of an otherwise democratic system?

Absolutely not. Parliamentary democracy has never been intended to provide democracy for the working class. It has always been used as a façade, a pretence at democracy, a rubber stamp of decisions made by the ruling class.

In 1774 – before most workers even had a vote – Edmund Burke said: “The elected member should …not (be) a mere delegate pledged to obey undeviatingly the wishes of his constituents. The electors are capable of judging his integrity, and he should attend to their local interests; but, more importantly, he must address himself to the general good of the entire nation, acting according to his own judgment and conscience, unfettered by mandates or prior instructions from those he represents.”

By the good of the nation, Burke means the good of the ruling class. This sense of entitlement and superiority has never gone away. For instance in February 2019, John Longworth, scientist, businessman and former director general of the British Chamber of Commerce wrote:

[This] “arrogance of the elite was brought home to me when giving a presentation in Brussels in January 2016 to an audience of senior EU officials. To my astonishment, the first question from the floor was to ask how we could possibly contemplate allowing people who are not college-educated to vote in a referendum...met by murmurs of approval from around the room.”

This is what the working class is up against. We will never achieve real democracy by tinkering with the current system. That will not tackle the root problem that parliament does not represent the people.

They will do everything they can to thwart all attempts to repeat such rare democratic instances. Then there was intense debate among the people leading to a vote in which every participant could sense that their vote mattered – and where clear decisions were made.

This reaction doesn’t mean we throw in the towel – that’s exactly what they want. But to successfully replace or transform parliamentary democracy to a system that works, we have to understand what we are up against.

Parliamentary democracy is not a universal timeless ideal – it reflects the needs of the ruling class. It is designed for the government of a capitalist state. It can’t at the same time meet the needs of the working class.

Let’s ask the question again: What is working class democracy?

An essential part of this would be lively and widespread participation in debate, a structure of representation where delegates are directly accountable to their electorate and respect majority decisions. The Chartists in the 1840s demanded instant recall of representatives, understanding that general elections every few years do not guarantee democracy.

‘Parliamentary democracy is designed for the government of a capitalist class…’

This idea of democracy was well understood by British workers in our history. The first trade unions in the world were created in Britain in the late 1700s and early 1800s in the face of severe repression. The Combination Acts, passed in 1799 and 1800, made trade unions themselves illegal.

After many twists and turns and much working class activity, the 1871 Trade Union Act recognised unions as legal entities entitled to protection under the law. But since then the ruling class have made many efforts to peg back that gain.

Perhaps because of such battles for existence, the structure of representation within many unions was based on the idea of delegates being elected from a constituency of members who had the opportunity to judge candidates on their record.

But the 1984 Trade Union Act made it a legal requirement for all voting members of a union’s national body to be directly elected by the entire membership. Workers could not stop that attack or other acts of interference in how we should organise.

What could life in Britain look like if we had working class democracy, working class control – what would we be aiming for? This list might be a start, though it’s the working class, the whole population, that would have to decide.

How do we achieve working class democracy? Above all, workers need to take responsibility and take control. That means starting where we work and where we live. Talking to people. We need to understand the size of the task facing us and the inevitable attempts to stop us succeeding.

Working with other workers on issues important for a sector, an area, or for the country can be a way to help spread the understanding that parliamentary democracy is a sham, and that the party political system and its elections are froth, hiding how decisions are made and where real power currently lies.

We need a new system if we are to have democracy. The exact format of that system will emerge as we find ways to combine with other workers to pursue our own interests – including no involvement in war. None of us can do everything but we can all do something.

• This article is based on the introduction to a CPBML discussion meeting held online on 10 May 2022.