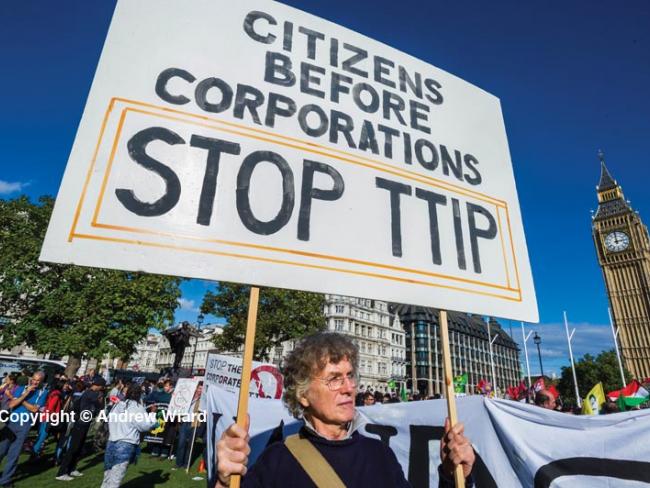 At first it was just another obscure trade treaty. Then trade unions started realising that their support for TTIP might need some rethinking. Now they are starting to understand just how dangerous it is…

Up until now opposition had largely been to two particularly obnoxious elements, rather than to the treaty as a whole. The first of these is the so-called Investor State Dispute Settlement process (ISDS), which would allow multinationals to sue governments without national legal systems having any say.

The second is the possible impact on the privatisation of the NHS, as TTIP could not only accelerate the break-up of the NHS but also make returning the whole service to public control impossible without repudiating the whole treaty.

But at a meeting at Unite HQ on 1 December under the aegis of the Campaign for Trade Union Freedom, two leading unions – RMT and Unite – announced that they are now pursuing a policy wholly opposed, not only to the issues of ISDS and the NHS, but to every aspect of TTIP, and its sister deal TiSA, the Trade in Services Agreement.

The two unions have recognised that TTIP threatens to demolish all agreements negotiated by trade unions, including collective bargaining on pay, summed up in the phrase “a race to the bottom”.

More than ever, workers are to be pawns in a global corporate game of deregulation and tax avoidance, without the right to be heard in a dispute – least of all in a claim against the British government, since Westminster ceded its powers of negotiation to the European Union, and treats opposition to TTIP with contempt.

Unite Assistant General Secretary Steve Turner apologised on behalf of his union, especially the automotive sector, for not having realised sooner the significance of a similar trade deal with Canada (CETA), which was ratified in Ottawa on 26 September 2014, and for having been in favour of TTIP.

John Hendy QC revealed that the leaked Canadian agreement with its over 1,000 appendices will be incorporated into TTIP. Attention was drawn to Section IV of CETA with its soothing reference to “fair and equitable treatment” – where capitalists decide what is “fair”.

‘It is in health where the richest pickings lie.’

Unite had mistakenly put its faith in the false promises of the EU Commission regarding growth and jobs, but academic studies (see Box 1) have shown that TTIP would represent a net loss to Britain. Unite was also worried about the cost of ISDS (a minimum of £4 million) based on figures from the Paris-based Organisation for Economic Co-operation and Development, the “club” of advanced industrial nations (OECD).

Welcome as its turnaround is, Unite clearly has yet to acknowledge that the real principle at stake is not growth on its own but national sovereignty. Free trade,
allowing capitalists to play off national workforces against each other and skip lightly over to the easiest tax regimes, is the opposite of national sovereignty.

The French government has acted to protect its cinematic heritage, but British entertainment union BECTU argues that it is a myth that the cultural sector and intellectual property will be exempt from TTIP. EU Commission reassurances are sounding increasingly hollow.

The fact is that the treaty negotiators are operating a so-called “negative list” of services not open to privatisation: all others are up for grabs and could be automatically privatised. Thanks to the French defending the integrity of their film industry and culture, the audio-visual sector has been excluded – but only from the initial talks.

Unions hope that the NHS can also be made an exception. But health represents a larger part of global GDP than any single industry such as automobiles or computers. It is in health and care services that the richest pickings lie for greedy corporations. It is hard to imagine them giving up on such a key prize.

And ISDS is hardly new. Some investors based in the EU have for some time been claiming the power to take developing countries to court for loss of profits. One example: in 2013 French multinational Veolia began suing for damages after the Egyptian government raised the minimum wage.

And it will be no use governments running to the European Court. Unlike deals under the World Trade Organisation or the General Agreement on Trade in Services (GATS), TTIP would not be subject in any way to rulings from the European Court of Justice. Which begs the question: Does TTIP represent the surrender of the EU to the US?

This deal between the EU and the US is being discussed in secret. Party to it is the ETUC, the European Trade Union Confederation, which purports to stand up for workers. At a meeting in London in October organised by the South East Region of the TUC (SERTUC), War on Want speaker John Hilary said that a 30-year ban has been imposed on access to the bi-monthly minutes and that not even MEPs will know exactly what is in the treaty until it is about to be signed.

They will be bounced into agreement, as Washington wants the deal completed by 2015 in time for the US presidential elections the following year. But the cat is already out of the bag (see Workers, September and October 2014). Unions across Europe, the US and Canada, as well as broad front organisations such as 38 Degrees and Stop TTIP (founded in Berlin), are campaigning to have TTIP thrown out.

At an increasingly angry meeting on TTIP called by SERTUC in October, a teacher from the Universities and Colleges Union asked why the EU claims the right to represent Britain in matters of trade? Taking their cue, others also raised questions about the EU. East of England MEP Richard Howitt could only splutter about UKIP (which, unlike Labour, opposes the treaty) and could barely respond.

A European Citizens’ petition against TTIP collected a million signatures. According to EU law, this should have triggered a compulsory debate in the European parliament, but that didn’t happen. This prompted an unusual ally, the Pope, to declare that “democracy” must not be allowed to collapse under the weight of the multinationals. What democracy, we may well ask? The EU entails loss of sovereignty, so is intrinsically undemocratic.

Such is the outcry (when 100,000 wrote in, the server crashed) that negotiations on ISDS have been suspended. Business Secretary Vince Cable feigns sympathy, but he is a willing party pleading with the newly appointed EU president Juncker to retain key elements of the treaty.

TTIP is not about reducing tariff barriers. Even the treaty’s backers acknowledge that. Rather, it is a mandate to maximise the profits of the transnationals. To do this it must erase all the normal regulations on health and safety, labour and environmental standards – what the EU calls “trade irritants”.

Through mechanisms such as “harmonisation” and “mutual recognition of regulations” any rules thought to impede profits will be reduced to levels tolerated in the US, or lower. For example, some 300 substances are banned in the cosmetics industry in Europe, against just 12 in the US.

At the SERTUC meeting a Unison health worker reminded listeners that in many states in the US the meaning of “right to work” has been distorted to encourage the banning of unions. There is a culture of very long hours and little holiday in the USA. Under TTIP this could happen in Britain regardless of union-negotiated agreements.

The British government and the City of London are complicit; the very banks which played poker with our money in 2008 and which Cameron and Cable have been pretending to rein in, are pressing for the removal of regulation under TTIP. A parallel Trans-Pacific Partnership (TPP) is also under way. The aim is a corporate-run world.

An additional international insight was offered by John Hilary, who suggested TTIP was a shoring up of power in response to a group of nations which included Russia and China. He called TTIP an “economic NATO”. (see also article on G20).

TTIP represents for us a direct class confrontation with finance capital. In Britain, and across Europe and America, workers are starting to rise to the challenge.

Hands off Britain! No compromise deal! Out of the EU!

TTIP: The extraordinary rendition of Britain

The holy freedoms of capitalism