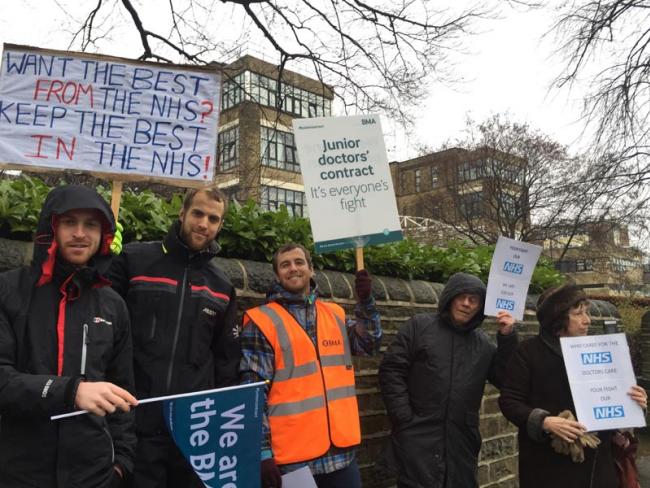 Junior doctors in Bradford on the picket line, March 2019, during their fight over contracts. Photo Workers.

In a report launched at its Medicine 2021 conference on 5 January, “Double or quits: a blueprint for expanding medical school places”, the Royal College of Physicians (RCP) has set out plans to double the number of medical school places, planning for Britain’s needs for the next ten years and beyond.

Back in 2018 the RCP called for the doubling of medical school places. Now it has provided a costed and detailed plan – with input from health economists – of how this could be achieved.

In the interim, another report – this time published by the General Medical Council – in 2019 found that for the first time Britain is actually importing more doctors than it trains.

It’s not just a waste of Britain’s own intellectual resources. It’s also a moral outrage that Britain is poaching doctors from countries that desperately need them.

If such an expansion were to be implemented, are there potential British students willing and suitable for the places? The RCP believes there are, and its report analyses demand: every year since 2011, in spite of tuition fees and fierce competition for places in medical school, there have been over 20,000 applications.

On top of this, Covid-19 has encouraged many young people to consider careers in the NHS. Using a dataset on applicants from the 2019 entry cycle, the report finds that of those who didn’t receive places, a significant number had strong A-levels: 3,635, over a quarter of the unsuccessful applicants, had A-level grades of three Bs or higher.

And young trainees are rushing to join the NHS. In response to the COVID-19 pandemic, final year medical students graduating in 2020 joined the workforce as FY1 grade doctors (the grade bridging medical school and specialist/general practice training) months earlier than normal.

But undergraduate medical education faces many immediate challenges: how to deliver clinical education safely, how to keep face -to-face learning going when so many universities, the homes of medical schools, have taken all activity online and banished students to their bedrooms and homes.

The RCP’s plan includes proposals to expand the clinical academic workforce. Clinical academics, employed by universities, have been neglected in documents like the NHS People Plan.

The report calls for proper planning to support and increase these roles. Likewise, the numbers of NHS-employed clinicians who teach medical students in hospitals, general practice and the community need to be expanded, and support for them increased.

If the report has a weakness, it is that its proposals are mainly aimed at England, because of the nonsensical division of the NHS into English, Welsh and Scottish (and, indeed Northern Ireland) organisations, each drawing up its own manpower plans. But the General Medical Council oversees undergraduate medical education throughout the nation, so the possibility for truly national coordination already exists.

The RCP has shown the way. Other health professions should follow suit.

Nursing shortages: move on from the blame game
Would-be doctors face squeeze while NHS continues to hire from abroad
Diet and obesity – an issue for the working class
Protocol denies life-saving drug to Northern Ireland
Nurses need action, not outrage from the sidelines