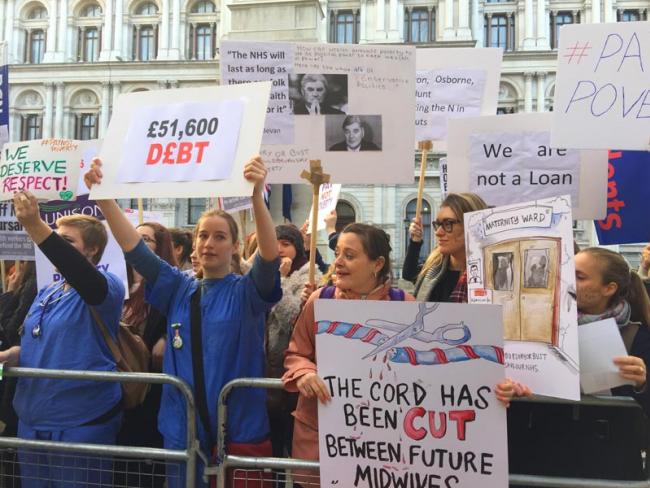 Medical students demonstrating outside the Department of Health at the end of 2015. Photo Workers.

On 28 September the president-elect of the Royal College of Physicians, Dr Andrew Goddard, said that Britain needs to increase the number of student doctors. There are currently around 7,500 medical students but Dr Goddard said that we need a further 6,000 doctors.

Britain has one of the highest proportions of foreign-trained doctors in Europe, at 28 per cent, all too many of them from countries far poorer than our own (see “How free movement is wrecking Romania”, p6). The Global Forum on Human Resources for Health recognises that developing countries need to retain their own healthcare workforces. And although it notes that migration of health workers to more developed countries is increasing, it remains focused on managing that migration. Britain can take a lead by training our own health professionals.

The government’s decision to cut nurse education places by almost a fifth between 2009 and 2013 caused the current shortage of nurses. Indeed, until 2014, more than 30,000 UK applicants for nursing courses were turned away annually, according to the Royal College of Nursing’s Nursing Labour Market Review.

The former Migration Advisory Committee Chair Sir David Metcalfe said in March 2016, “There is no good reason why the supply of nurses cannot be sourced domestically. There seems to be an automatic presumption that non-EEA [European Economic Area] skilled migration provides the health and care sector with a ‘Get out of Jail Free’ card.”

Diet and obesity – an issue for the working class
Protocol denies life-saving drug to Northern Ireland
Nurses need action, not outrage from the sidelines
Applications flood in for medical schools
NHS set to change