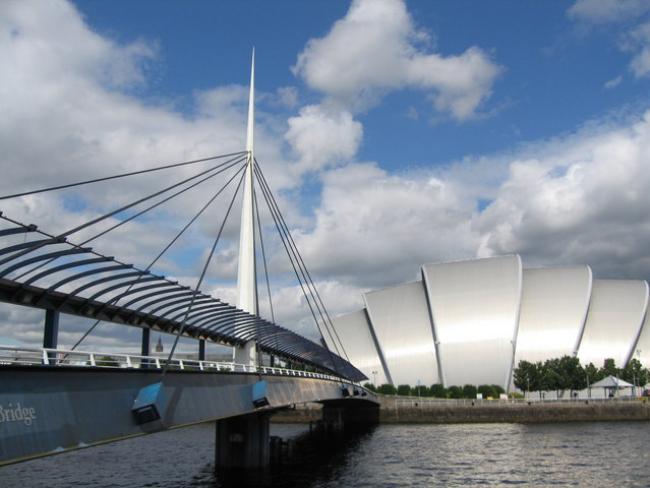 Bell’s Bridge, Glasgow, with the Clyde Auditorium (the “armadillo”) across the river. Photo wfmillar (CC-BY-SA 2.0)

A successful, well attended and reflective meeting was held by the CPBML in Glasgow on 10 March on the topic “Why trade unionists should vote to leave the EU”. The focus of the meeting was on the purpose of the EU – to support and facilitate global capitalism and therefore by definition to be destructive of workers’ interests – and the wide-ranging myths that surround it.

Contributions from the audience were wide-ranging and well informed, covering many reasons why a vote to leave was the only option for workers. The audience included representatives from the umbrella movement GO, the Grassroots Out campaign which is arguing for a Leave vote in the 23 June referendum.

The discussion continued after the close of the meeting and included the newly released CPBML pamphlet Out of the EU!, which was well received – so much so that members of the audience took large numbers of the pamphlet away for distribution.

British workers’ growing clarity on the EU in recent years, despite the multitudinous efforts to befuddle and bore them, was applauded and celebrated. At the same time the woolly, contradictory thinking, with which too many of our class and those they allow to lead the unions, are still beset, was exposed and condemned.

A failure to grasp the origins, purpose and impact of the EU works directly against the interests of working people everywhere and acts as a great fillip to global capitalism. It is essential that these woolly thinkers inform themselves properly on matters of, for example, health insurance, holiday entitlement, health and safety, pay, contracts and the reasons for, and effects of, migration both at home and abroad.

One speaker drew attention to the issues surrounding TTIP and TiSA, and the recent incomprehensible decision by the Scottish Trades Union Congress to support remaining in the EU despite their opposition to TTIP!

The speaker summarised a motion from three trades councils (Glasgow, Clydebank and Kilmarnock & Loudon) that will be debated at the congress when it meets in Dundee in April, and which argues that support for remaining in the EU is contrary to the policy of opposition to TTIP.