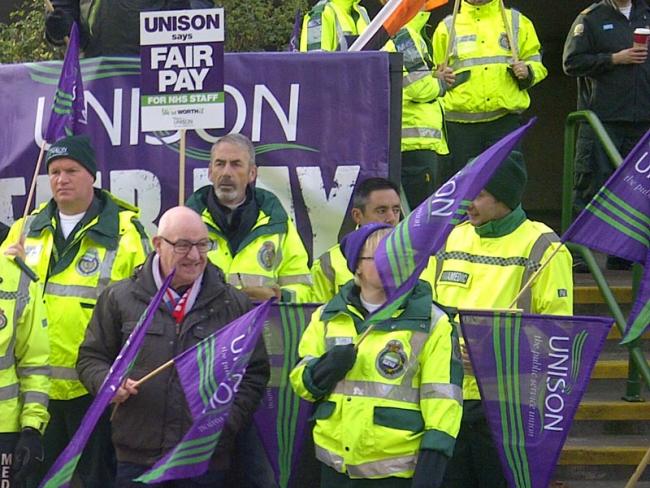 Ambulance workers picketing outside the headquarters of the London Ambulance Service during the strike on 24 November.

Unions in the NHS are set to start balloting their members on the pay offer that their industrial action has extracted from a reluctant government. Unison’s ballot, for example, begins on Monday 9 February and will finish on 2 March, with a decision to be announced shortly after. Unison’s Health Service Group Executive will meet on 3 March.

If the offer is accepted, the issue is closed. Otherwise, the union is set to move to further strike on 13 March. In the meantime, industrial action is suspended in England and Wales, though Unite and the GMB union went ahead with a strike on 29 January in northern Ireland after its health department failed to announce improvements in line with those offered by health secretary Jeremy Hunt.

‘It is almost a law of class struggle that it is the quality of industrial action that determines its outcome.’

There is a reason for this. The health workers have simply not been willing to mount a sufficiently strong campaign of industrial action. It is almost a law of class struggle that it is the quality of industrial action that determines its outcome. Strong, well organised and effective action will lead to settlements that come closer to the claim being fought for. Uncoordinated and badly supported action will result in no response at all from employers, or derisory offers. NHS pay is an eloquent demonstration of this.

But while all eyes are on Jeremy Hunt’s general pay offer to unions, an important aspect of that offer is getting scant attention – the provisions that relate to ambulance workers.

Almost a year ago a national strike in the ambulance service very nearly took place, as reported at the time in Workers magazine (“Ambulance dispute looms”, April 2014), over the employers’ proposals to change the unsocial hours provisions of ambulance workers’ terms and conditions. Hunt’s current offer settles that dispute – by conceding the unions’ point. The offer also talks about reimbursing ambulance workers’ pension contributions, which unions hadn’t even asked for!

‘The fact is that ambulance workers are generally better organised and more highly unionised.’

Why these big steps forward? The fact is that ambulance workers are generally better organised and more highly unionised, and are capable of delivering dangerously powerful industrial action. The prospect of a 12-hour ambulance strike on 29 January really shook the government, which had struggled to cope with the four-hour strikes in October and November – and it would have been followed up by a 24-hour strike planned for 25 February.

The prospect of a real threat to life and limb on the streets of London and other large cities finally shook the government into action. Hunt called the unions in, initially to lambast them, but ultimately to make an offer he didn't want to make.

There were essentially two different disputes, with two distinct levels of industrial action: one in the ambulance service and the other in the rest of the NHS. So it should come as no surprise that there are effectively two different settlements on offer.

What the two disputes have in common is that they both reflect the industrial action that produced them. Hard and effective industrial action in the ambulance service produced an uplift to this year’s pay offer, the settlement of a previously unresolved dispute and a bonus payment that hadn’t even been sought.

Weak and disparate action in the rest of the NHS produced an offer which it is easy to disparage. But members who disparage it but who had not been on strike have lost their right to a say.

Too many health workers sought exemptions from action, or effectively exempted themselves by deciding to scab. Yet those same workers will take the pay rise that the action produced. Those workers who aren’t even in Unions have no right to a pay rise, and it’s about time they were told that.

Lessons, as from all disputes, will have to be learned. Non-union members must join. Union members must fight once the decision to fight has been taken, and must vote in the ballots that lead to action.