Junior doctors make a stand for the NHS 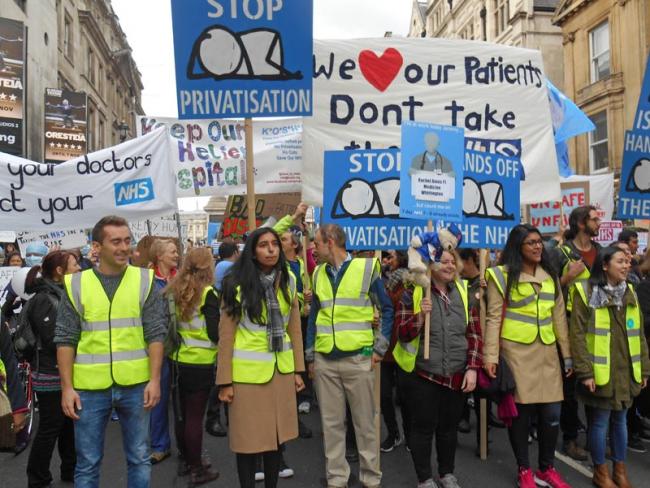 Doctors turned out in their thousands on 17 October to march against the government’s proposed new contract. Photo Workers

Jeremy Hunt’s hamfisted attempt to force junior doctors to agree to an outrageous new contract has already backfired. Armed with the knowledge that they are defending the NHS, the doctors are fighting back…

The BMA was acting in response to the news that the government intends to impose a new contract with effect from August 2016, possibly using the fire and re-hire tactic increasingly popular with employers, ever since Rupert Murdoch used it to move newspaper production to Wapping and to try to break trade union organisation in the print industry. Protracted negotiations over two years had reached an impasse.

Hunt has tried to muddy the waters of the negotiations by claiming that the new contract is to enforce the government’s “seven-day working”.

This has been met with a sharp response from junior doctors, who know only too well that we already have a seven-day NHS, and understand the sham. Equally, when Hunt plays the safety card, as he has been doing since the Mid-Staffordshire hospitals affair, all health workers know that adequate numbers of trained professionals are the best guarantee of patient safety.

The evidence used to support the seven-day working claim does not stand up to the scrutiny of critical appraisal. While it is true that the published papers which Hunt likes to quote so often do indicate an increased risk of mortality for patients admitted at weekends, the evidence does not show a link with staffing arrangements.

In fact, patients admitted at weekends for elective surgery scheduled midweek will by definition be those in poor health, who can expect worse outcomes than healthier patients admitted the night before or on the day of their procedure.

Further government duplicity was revealed by an ex-Tory health minister and doctor, who told newspapers that by September 2014 there was broad agreement between the BMA and the Department of Health and a deal was close, but Hunt intervened to change the Department of Health’s position. Negotiations, which had begun in 2013, broke down as both consultants’ and junior doctors’ representatives had no choice but to withdraw.

The government referred the contracts to the Review Body on Doctors’ and Dentists’ Remuneration. Hunt announced its findings in a speech to the King’s Fund, as part of his propaganda offensive.

Under the new contract junior doctors’ normal working day would be increased to include a considerable amount of evening and weekend working, with an extension of “standard time” from 60 hours to 90 hours a week. Currently 7pm-7am Monday to Friday and the whole of Saturday and Sunday are considered “antisocial” hours, rewarded by a higher rate of pay. Under the proposals, “standard time” would be extended to 10pm in the evening from Monday to Friday and on Saturday too. This would enforce a pay cut of 15 per cent for many junior doctors, especially those in areas like emergency and acute medicine, which depend on out-of-hours working.

The achievement of limits to junior doctors’ working day, after many years of struggle, is threatened by an end to the sanctions NHS Trusts can incur if agreements on junior doctors working time are breached.

Under the current New Deal contract this is enforced, not through the European Working Time Directive as the government would like us to think, but through a banding system. The banding system, hard-won, enforces payments for hours according to the length of the period spent at work, and the hours when these fall. It has built-in safeguards to prevent excessive hours and to ensure doctors receive sufficient rest and breaks, and is enforced by monitoring visits. If a Trust is found to be in breach of these, it faces a financial penalty. This would be scrapped, and the Review Body suggested the European regulations be substituted.

The European regulations are far worse than the existing contractual provision, only allowing for shorter and less frequent rest periods, with no effective enforcement mechanism. The New Deal contract provides a safety net to prevent junior doctors from having to work dangerously long hours. The government has told the BMA it plans to reduce the number of breaks during shifts down to just 20 minutes every six hours. In practice, the BMA says, this could mean that a doctor working an 11-hour shift will only get a single 20-minute break.

Trainees in general practice, where there is already a staffing crisis (covered in recent issues of Workers), could end up earning less than their hospital colleagues. At the moment GP trainees are paid a supplement, which ensures they are not financially disadvantaged for their choice of specialty compared with hospital trainees. This would end, and general practice will be even more unattractive. In London, 30 per cent of GP vacancies are currently unfilled. This gives the lie to Hunt’s and NHS England’s rhetoric about the importance of general practice.

Many who spend time in higher education or research would lose their right to annual increments. Doctors who change specialty, a not-uncommon career path in areas such as surgery, where there are many sub-specialties, would have to start again at the bottom of the pay scales.

‘The scandal has implications for patient safety.’

Doctors who work less than a full working week, as is often the case in specialties like paediatrics, known as Less-Than-Full-Time, would be significantly disadvantaged. The practice of Fixed Leave, by which junior doctors can be told by diktat when to take annual leave, will continue. This has long been a significant problem for junior doctors and their work-life balance.

The BMA is demanding the following before negotiations can re-open:

The scandal of an NHS staffed by exhausted, demoralised over-worked junior doctors, and locums galore, has far greater implications for patient safety than any of the incidents that Hunt and his fans like to cite. Add to this that 20 trusts are now in “special measures” and a further 27 are receiving “intensive support”, and Hunt’s wrecking intentions towards the NHS become crystal clear.

Many of the medical Royal Colleges, which traditionally stand aloof from trade union issues, have voiced concern about the proposals. Consultants, who remember the conditions under which they trained, have expressed considerable support for their junior colleagues.

The junior doctors have shown spirit and unity, to say nothing of tactical ingenuity, and have wrong-footed the government. A few have been heard arguing that doctors should betray their colleagues and run away from the situation by emigrating. This struggle has made it clear how migration works in the interests of capitalism, never in the interests of workers. These voices should be condemned as cowardly agents of the government. Stand and fight.

In their first struggles in the 1970s, junior doctors understood that they were workers like any other. They have come a long way, and are showing greater clarity over issues like migration and the EU than many in our class. On their demonstrations they chant the name of their union, showing a pride in their organisation lacking elsewhere in the class. We can all learn from their struggle.