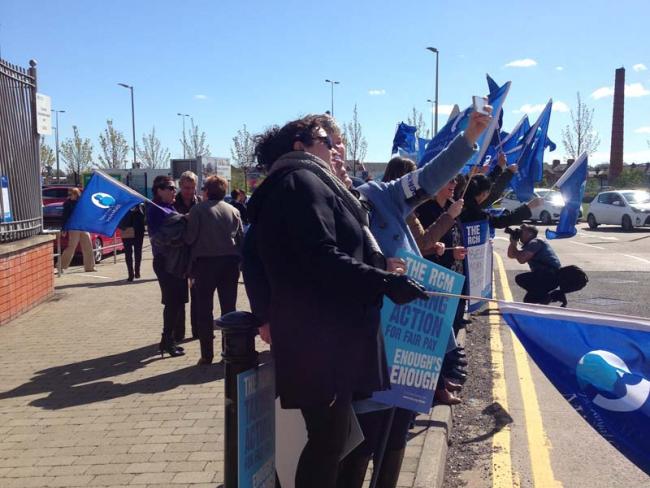 Midwives on the picket line in Belfast.

Hundreds of union members belonging to the Royal College of Midwives and the Society of Radiographers struck for the first time ever in hospitals across Northern Ireland on 30 April as part of the ongoing public sector pay battle. The four-hour strike, with emergency cover provided, meant midwives struck for an hour, returned to duty for an hour, struck for an hour and so forth throughout the four-hour period.

This ensured absolute safety to mothers and babies, as well as ensuring that all members were involved in the action – and it completely confounded the computerised wages system, which cannot cope with such fluctuations. So the workers conducted a four-hour strike with hugely well attended picket lines and effectively no loss of pay in an action that demonstrated not only ingenious guerrilla tactics but also showed soaring morale and confidence among the members.

The hospital strike, part of a protracted fight over pay and against cuts, follows on from a strike on 13 March across the public sector which paralysed Northern Ireland, involving workers in health, local authorities, the civil service, teaching, transport and other sectors.