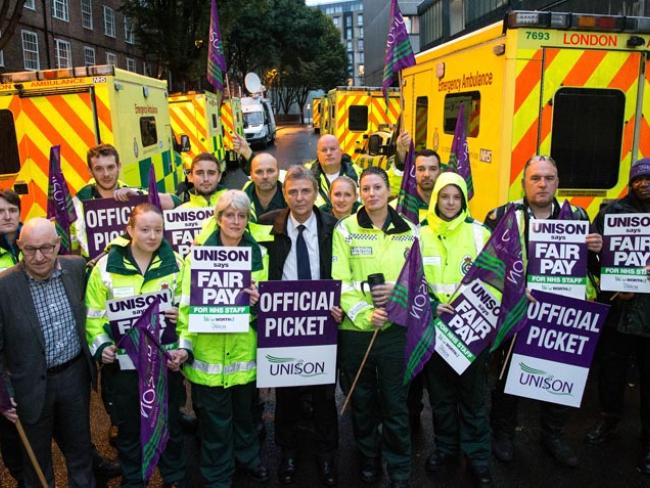 It’s bad enough that the NHS has been lagging behind inflation for seven years but take the rise in travel costs, accommodation and food into account and the gap between the pay “rise” and RPI becomes even starker. Even the employers are becoming increasingly concerned at the difficulties they face when trying to recruit and retain health workers.

Growing discontent with the so-called 1 per cent pay cap, even among a smattering of government MPs, has led to the current Framework pay offer, amounting to 6.5 per cent over three years for those at the top of their bands but bigger increases for the lowest paid.

With its many internal and somewhat technical restructurings the offer is deliberately obscure. And being spread over three years it will be harder to unravel. But some things are clear: first, nearly all the unions recommended the Framework agreement. Only the GMB continues to put its own poaching efforts above working class solidarity.

Second, the offer is considerably better than before negotiations began. Third, it is the first funded offer to break the pay cap – last year’s Pay Review Board actually considered giving no pay award!

And fourth, there is agreement that the top of each pay band is the full rate for the job. This destroys Hunt’s attempts to do away with pay increments. Over 85 per cent of current NHS staff will be at the top of their band by the end of the three year agreement, far more than now.

For the unions this means major pay increases for staff below the top band, meaningful increases for top-of-band staff, big improvements to starting salaries and an immediate move to a new above-living wage minimum rate, with further increases for the lowest paid staff by the end of the deal.

Health workers are being given a long time – until 5 June – to consider the offer, perhaps in recognition of its complexity. The ultimate question hasn’t changed, though, and a rejection of the offer is only real if workers are prepared to undertake industrial action to move the employers.

To do this would require mobilising more than 50 per cent of staff, more than half a million workers,  to vote, and for half of these to vote in favour of action. An alternative future is a reversion to fighting locally instead of just nationally over pay, but the consciousness and organisation necessary for such a move lies some way off.