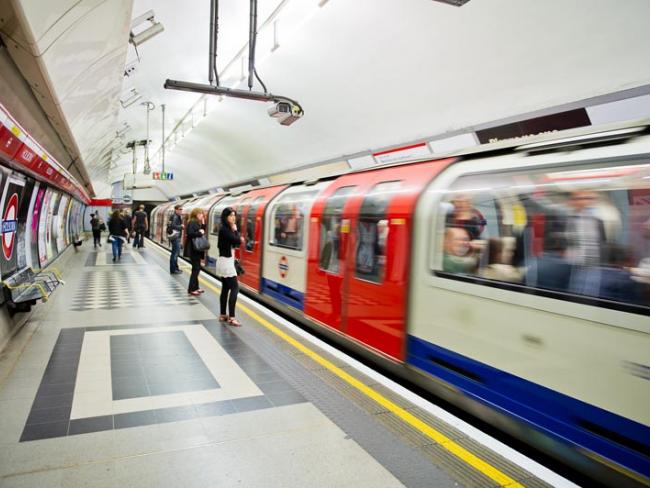 The Central Line at the busy Holborn tube station. London Underground says it wants to run a 10-minute service throughout the night. Photo Julius Kielaitis/shutterstock.com

Tube unions called off strikes in August over the “night tube”. But the battle is not over yet…

The long-running dispute over the introduction of a 24-hour rail service on London’s underground took a positive turn when RMT, TSSA and Unite called off two further 24-hour strikes scheduled for the last week of August. But the unions also set dates for more strikes in September to put more pressure on London Underground to negotiate an acceptable settlement.

The unions have made it clear that any attempt to start running the night tube on the target date of 12 September or even running test services in preparation for it, would result in immediate action.

The dispute has been simmering for a long time, and has its roots in the decision last year by London mayor Boris Johnson to abolish ticket offices and cut nearly a thousand jobs, leading to one-day strikes by station staff in both RMT and TSSA. While this was going on, Johnson announced that London Underground would in September 2015 be starting the night tube 24-hour service at weekends.

Johnson, along with Cameron and his Bullingdon Club cronies, hates trade unions – and above all they hate the rail unions. As soon as he became mayor, Johnson started an ideologically driven war with the rail unions and the London Underground staff they represent.

Johnson has been making the strategic decisions. But notably he has refused to be directly involved in the disputes that he deliberately engineered, instead leaving his London Underground management team to do his dirty work for him.

Strikes by RMT and TSSA station staff in 2014 had only a limited impact on services. So the unions executed a tactical retreat, no doubt aware that the night tube issue was going to be a major battle for all London Underground’s staff, not just the station staff, and the real fight was coming soon.

‘A point-blank refusal to negotiate.’

Recent changes in the senior management team have failed to change the dictatorial approach to industrial relations at London Underground. Instead of negotiating and consulting with the unions over the introduction of the night tube, as has been the norm in the past, management tried to impose new working arrangements which if accepted would have a severe impact on the work-life balance of many staff.

This was coupled with a point blank refusal to negotiate over suitable compensatory payments for what is a fundamental change to hours of work and rosters. The annual pay negotiations were then deliberately thrown into the mix so that London Underground, Boris Johnson and the likes of the anti-union rags the Daily Mail and the Evening Standard could then accuse the workers of being greedy, and ungrateful for having such wonderful well-paid jobs!

After months of attempting to get London Underground to engage in meaningful discussions, patience ran out when last ditch talks at ACAS never got beyond London Underground sitting in one room and getting ACAS officials to scurry to and fro to another room where the union negotiating teams were located.

The first one-day strike was staged after ballots held by all four unions (RMT, TSSA, Aslef and Unite) delivered overwhelming votes in favour of industrial action. The ballot results were a particular slap in the face to Johnson, who has been very vocal in his support for the inclusion of much tougher thresholds for strikes in the anti-trade union bill now going through Parliament. All of the ballot results would have exceeded the threshold currently being proposed.

The first strike was held for 24 hours from 18.30 on 8 July, a tactic designed to have a one-day strike cause disruption over two days. Unlike the 2014 strikes, this time all of the tube staff took strike action. No tube trains ran, and there was also a knock-on effect on Chiltern Trains services. London’s roads were gridlocked for much of the day. An overtime ban and work to rule were also put in place, resulting in further disruption.

Despite a continuing massive media campaign against the tube workers that regurgitated a tissue of lies put out by London Underground, there has been enormous support from the public for the staff.

The strike moved London Underground but only slightly. They continued their provocative approach to what passed for negotiations with the unions, and so a further strike was held for 24 hours on 5/6 August. It was as solid as the first one, and achieved the same effects on London’s transport.

With 12 September set as London Underground’s target date for starting the night tube, and no sign of the unions’ resolve cracking, management employed new tactics.

London Underground had begun to talk meaningfully on some issues, but had engaged in what is effectively psychological warfare by finding reasons to go back on areas where progress had been made. Discussions between London Underground and the unions during August have been characterised by TSSA as like a game of snakes and ladders.

It is worrying that London Underground had at least some success with their tactics of divide and conquer, convincing drivers’ union Aslef to suspend industrial action long before the other three unions felt able to do so. Yet since many drivers are in RMT and Aslef drivers are clearly reluctant to cross picket lines, London Underground advised passengers that there was unlikely to be any service on the strike days anyway!

Division among the unions is bad in any dispute, but even more so in one as politically crucial as this one. Aslef needs to reflect on the need for unity in opposing someone like Johnson and his backers.

Aslef has a habit of splitting off from the negotiating alongside other unions right across the rail industry, and while its tactics have often yielded short-term gains, its sectionalism often seriously damages prospects for unity and solidarity which will be crucial if the rail unions are going to be able to withstand the onslaught from this government in the future.

The RMT and TSSA have been particularly critical of the safety issues relating to the introduction of the night tube. Johnson wants a night tube on the cheap, and seems hell bent on putting the lives of both staff and passengers at risk by trying to run the system with minimal staff numbers. Not only will there be few station staff, but there will also be fewer staff in the control centres that monitor the many CCTV cameras essential for a safe and secure rail system.

London Underground has decided that much of the staffing of stations at night will be by new recruits on part-time contracts, and is particularly keen on attracting students looking for paid work to do alongside their studies. This means that young and inexperienced staff will be expected to deal with some of the most difficult situations any station staff could expect to encounter.

Everyone knows that these staff will be regularly faced with large numbers of intoxicated passengers, some certainly violent. With services in some parts of the network down to a 30-minute frequency, passengers looking to get up to high jinks or worse will have plenty of time to do so.

‘The unions will need to avoid being suckered into sectionalism.’

Only ten years ago, tube staff were being publicly congratulated for their bravery in dealing with terrorist bombings. Yet London Underground intends to have some of its station staff unqualified to do anything other than answer queries and help travellers use self-service ticket machines.

London Underground has apparently stated to unions that in the event of a major emergency in the future, the unqualified staff would be instructed to abandon their (very small number of) qualified colleagues to get on with it and to leave the station completely for their own safety.

Not all of the tube lines will be running a night service. This means that some stations will only be partially open, some platforms being open for trains and others being closed. London Underground have been unable to satisfy the safety authorities that they have adequate measures to keep the public out of the closed areas – not surprising given that at some stations it is proposed to use elasticated barriers of the sort usually used to manage queues.

Faced with an intransigent management backed by an ideologically driven mayor and government, the rail unions and their members have shown that by being resolute and united, they can force significant concessions from those that would attack their public service and their pay, terms and conditions. It looks as though they will win this particular battle.

But tube workers will need to strengthen their organisation still further, including making sure the new tube staff are recruited into the unions. The unions will also need to understand the forces that confront them, avoid divisions that will give comfort to the class enemy, and avoid being suckered into sectionalism.