They're turning prisons into profit centres 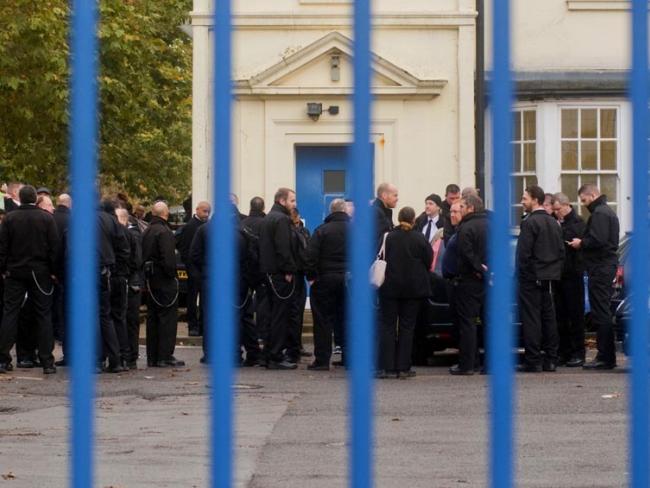 Pentonville Prison, London, November 2016: unable to legally strike, prison officers stage an unofficial 24 hour walkout in protest at the dangerous state of a Prison Service with only the minimum number of staff. Photo Stefano Cagnoni/reportdigital.co.uk

The prison population is soaring. Meanwhile, conditions of work suffer – and more prisoners than ever are commiting suicide and self-harming. But never mind, there's profit to be made...

Britain’s prison service has reached yet further landmarks of decline with the number of suicides, prisoners dying in custody and incidents of self-harming soaring along with the ballooning prison population.

Trouble is brewing, routinely. Last year saw more prison riots and disturbance – Bedford, Swaleside, Birmingham and so on – since the Strangeways riots of 1993. The only statistic heading downwards has been the number of prison staff – cut by 25 per cent since 2010. The Chief Inspector of Prisons describes prisons as “unacceptably violent and dangerous places”.

The facts speak for themselves. According to official figures released on 26 January by the Ministry of Justice, last year saw 119 suicides, 354 prisoners dying in custody, and assaults soaring to more than 25,000. Nearly half of prisoners self-harm – 37,784 prisoners last year. Meanwhile, the prison population rose to more than 85,000.

For its population, Britain has more people in prison than almost any country in the West. Despite year-on-year warnings that the system cannot cope, successive governments have continued to expand it. Whose interest is served by this situation? Step forward the privateers.

The policy of building private prisons generates a business interest to continually expand the prison population for a handful of companies like G4S, Sodexo Serco.

Bigger, more modern prisons run by private companies are not about reform or rehabilitation but about increased company profits.  Why bother to address the causes of crime, or to reform offenders, since an expanding prison population is good business for the privatised prison companies?

Look at the circumstances and backgrounds of most inmates, and you can see that the issue of prison is a class question (as are the crimes committed against society by capitalism that go unpunished).

‘More than half of prisoners self-harm.’

The prison system shows the genius of capitalism: it can generate a profit from the worst aspects of behaviour in society. But where is the dividing line between the criminal and those who benefit from the spoils of crime? What happened to the bankers who caused the financial crash of 2007 to 2008? Nothing.

The trend towards privatised prison building began in the 1990s. It naturally required defeating the unions to enable the companies to cut staff levels and cut wage and pension costs. Average basic pay rates for prison officers are 41 per cent higher in public than in private prisons.

Private prisons impose longer hours, and worse pension, overtime and leave arrangements, and they don’t recognise the Prison Officers’ Association. Staff turnover is 25 per cent a year, against 2.5 per cent in public prisons. And – no surprise – the most expensive prisons of all are those set up under the Private Finance Initiative, mainly by the last Labour government.

Conditions in prisons can be inhumane, with many prisoners sitting out their sentences in overcrowded shared cells, eating, sleeping and using the toilet in the same small space as another person up to 23 hours a day.

The last Chief Inspector of Prisons said in 2016 that he was losing his capacity for disgust. His judgement on young offender institutions was that they were even worse than adult prisons, citing appalling levels of violence and self-harm, and that the custody model does not work. Feltham, the west London young offenders institution, has a shortfall of 67 officers according to official figures released on 16 February this year.

Educational and training opportunities in adult and youth prisons can be minimal or non-existent, often due to staff cuts, turnover or a lack of resources. When their sentences are over, ex-prisoners are turned out of prison with little help to restart their lives or get a job. Many of the rough sleepers on Britain’s streets are ex-prisoners.

The evidence shows that education and employment are critical in reducing re-offending and therefore cutting crime – yet only around one in four prisoners enters employment on their release.

Just one in six leaves prison with an education or training placement. One in three leave with nowhere to live. 74 per cent of those with no work or accommodation on release reoffend, as against 43 per cent of those who have worked in prison. We need more support on release, more ability to earn and save for release.

Levels of mental illness among prisoners are very high. We should stop using prisons as asylums. The NHS and Primary Care Trusts must be funded adequately to provide court diversion schemes, whereby mentally ill offenders can be given appropriate health provision outside the criminal justice system.

For this to work, additional investment must be made in community mental health, medium secure healthcare places and halfway houses. Residential drug treatment places at £35,000 a year compared with more than £40,000 a year for a revolving door prison place will save millions.

There were 3,885 women in prison in 2015 – a small proportion of overall numbers, but many of them are mothers of young children, and their imprisonment often breaks up families. Yet the vast majority of women sent to prison have not committed serious or violent crimes.

Nearly two-thirds of women prisoners have been abused. Two-thirds of women entering prison do so on remand, very many for psychiatric assessment. It’s time for government to deliver on its promise to develop women-only bail hostels.

Britain has the highest imprisonment rate in western Europe and the most rapidly rising prison population. We have more people serving life sentences and we lock up more children, from an earlier age, than most of the rest of the world’s countries.

This is not because we have more crime, or more serious crime than other countries. It is because we send more offenders to custody for longer periods than any other country in Western Europe.

In 1993 Home Secretary Michael Howard claimed, “Prison works.” He said of his proposals to toughen up the criminal justice system, “This may mean that more people will go to prison…We shall no longer judge the success of our system of justice by a fall in the prison population.”

‘Conditions of work in many prisons are becoming intolerable.’

Since then Tory and Labour governments alike have forced numbers up. Yet the number of prison officers was cut by 5,200 between 2010 and 2016. The number of full-time prison officers dropped by 600 in the last year. Conditions of work are becoming intolerable in many prisons due to acute staff shortages, lack of training, and increasing numbers of prisoners.

According to the National Crime Survey crime rates are falling. But more people are going to prison. In 1991, 15 per cent of those found guilty of indictable offences were sent to prison – in 2011, 25 per cent.

And the number of men, women and children sent to prison has more than doubled in two decades, notes the Howard League for Penal Reform. All this comes at a terrible cost to taxpayers, society and communities. When costs fully are accounted for, each prison place costs an average of £40,000 a year. Adding to the problem, 12 per cent, 10,000, are foreign nationals.

Appallingly, children as young as 10 can be branded as criminals in Britain – the lowest age of criminal responsibility in Europe, and well below other countries such as France, Italy and Spain. The younger a person is imprisoned, the higher the likelihood of reoffending: 78 per cent of all offenders under 21 reoffend within two years, and more than 80 per cent of children aged between 15 and 18.

The overall reoffending rate after prison has risen from 51 per cent in 1992 to 67 per cent. The financial costs to society of reoffending have been estimated at up to £13 billion each year. Prison clearly isn’t working. Under capitalism criminal justice is a business, generating misery for many and massive profits for the few.