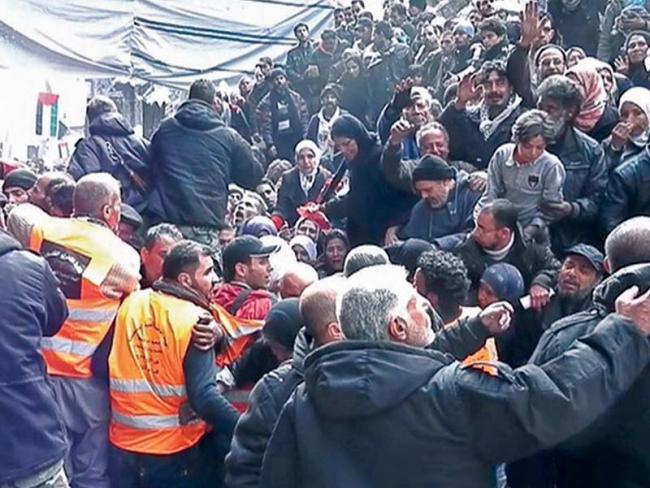 Reports have reached Workers that the combined force of all the armed rival Palestinian factions in the giant Yarmouk refugee camp in Syria, plus the Syrian Arab Army and the Palestinian Liberation Army, a division of the SAA, have liberated most of the camp from ISIS, the terror group. Information is still very sketchy, and the number of casualties is unknown. There is now talk about aid getting into the camp.

For all that, Yarmouk was considered the safest place in the safest Middle East capital and was renowned for its hospitality.

That all changed when the Syrian civil war broke out in 2011. Islamist and criminal gangs roamed the Syrian countryside, but Yarmouk was always a safe haven for Syrians displaced by the fighting. Then the Islamists entered the Yarmouk some two years ago, taking over most of the camp and looting the houses. Most of the population fled and now reside either in Damascus or in other Palestinian refugee camps in Syria and in Lebanon.

But 18,000 stayed, determined to keep their homes in the camp, which was placed under siege by the Syrian Arab Army demanding the surrender or withdrawal of the Islamists. Then one group metamorphosed into another more extreme gang, and 18 months ago ISIS took over the camp. There followed many executions for blasphemy, and the looting and rape continued, but the Palestinians took up arms and fought and defeated ISIS – only for them to be replaced by al-Qaeda.

The Palestinians were divided. The Palestine Liberation Organisation (PLO) stayed neutral on the basis that the war was an internal Syrian affair. Non-PLO Hamas had previously supported the anti-government fighters because of their association with the Muslim Brotherhood. Meanwhile, PLO had suspended the Popular Front for the Liberation of Palestine–General Command (a faction loyal to the Assad government) for taking up arms in support of the Syrian state and fighting alongside the Syrian Arab Army.

More recently ISIS took over the camp in greater numbers after being invited in by al-Qaeda. The PLO convened a meeting of all Palestinian groups plus the Syrian Arab Army, which agreed a united strategy to fight ISIS. This unity is unique in the Syrian tragedy and should serve as a lesson to all of the disaffected armed groups in Syria who claim to be opposed to the alien Islamic terrorism of ISIS and al-Qaeda.

This unity is an alternative for the myriad of armed gangs across Syria, thought to number over a thousand, who compete for funds from Saudi Arabia, Qatar, the Gulf dictatorships and NATO, and which falsely assume the name of “rebels”. The real traitors in their country are ISIS and al-Qaeda, and so the combined strength of the Syrian Arab Army, which itself has lost 60,000 dead, and the disaffected gangs, could quickly put an end to all foreign intervention and lead the unity and salvation that Syria needs.