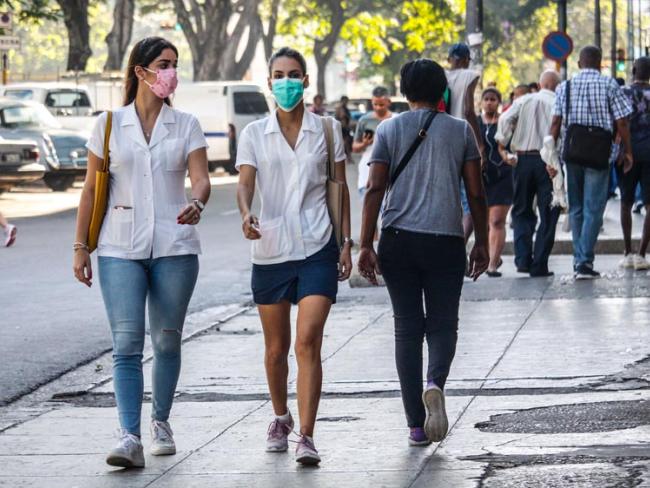 While the latest significant rise in infection levels in many European and American countries has not happened in Cuba, there has still been a low level but persistent spread of the virus in Havana. The Cuban approach to public health is to keep a careful watch and to act quickly to prevent any worrying developments. The way they are dealing with the rise in infections is illustrative of their resilience and strength in adversity.

Covid-19 has almost been eliminated by aggressive anti-virus measures and “shoe leather epidemiology” in the country as a whole. This painstaking method of inquiry into the origin of an infection by walking door to door to ask direct questions was famously used, successfully, by John Snow in 1850s London to investigate the spread of cholera in Soho.

In Cuba, more than 90 per cent of all cases have been traced through following up the contacts of spreaders. Medical students have knocked door to door to screen for virus symptoms in homes, and checking on quarantine compliance.

By early September the population of around 11 million had suffered roughly a mere 4,000 confirmed cases and fewer than 100 deaths, among the lowest in the region, so the strategy was working well.

The rise in Havana from a few cases to dozens daily over the month of August meant decisive action needed to be taken.

‘In Cuba, more than 90 per cent of all cases have been traced through following up the contacts of spreaders…’

From early September, a 7pm to 5am curfew was put in place, with people racing home in the evenings to make sure they were not breaking the curfew. By the time it started, the normally crowded streets were deserted.  Police were posted at road junctions around the city, stopping all traffic to check whether drivers had the necessary special travel permits which were only issued in extraordinary situations.

Most shops were forbidden to sell to people from outside the immediate neighbourhood, to reduce as much as possible the incentive for anyone to move around the city.

The usual requirements from people in many countries across the world in the period of Covid were strictly enforced – mask-wearing, avoiding large gatherings and maintaining social distancing. Breaking these and other Covid measures brought large fines and even prison for serious violations.

Now many measures have been eased in Havana, as the situation has significantly improved, with the daily Covid news reporting a handful of new confirmed cases and almost no deaths.  The government has announced a “period of new normality”.

How are such outcomes achieved? Cuba’s health service is widely acknowledged – including by the World Health Organization – as exceptional, with outcomes such as life expectancy and infant mortality better than or equal to those in the US. And all this during a 50-year economic blockade by the US doing its utmost to destroy Cuba. It is the most enduring trade embargo in modern history.

The global pandemic has not caused any humanitarian let-up in these efforts. In fact during the election period Donald Trump has increased the regime of sanctions to ramp up the pressure on the Cuban economy.

If the US blockade already makes life in general harder in Cuba, how are the Cuban people managing in the Covid period? There are the usual grumbles about the difficulties in everyday life caused by the restrictions, but there is a high level of compliance. Some western commentators put this down to heavy-handed authoritarianism on the part of the government, but this is to misunderstand how government works in Cuba.

The high level of “buy in” shown by the populace has been hard won, by democratic structures built over decades since the Cuban revolution. In health, for instance, the emphasis is on primary care and prevention. Cuban medical schools are government run and free to attend. Study includes primary care, public health and the social determinants of health. Health promotion is prioritised over sickness control.

There is a robust system of community-based medical and mental health services with 100 per cent coverage for all citizens, including in the most remote rural areas. This system is based on local polyclinics and family medical offices which serve specific residential areas, so nobody is missed.  These provide basic primary care services in both the local offices and on home visits.

Health promotion is an essential part of the role of medical staff, including screening, education and an understanding of family and social circumstances. In treating patients, physicians consider all factors in health, including education, housing, environment, nutrition and employment.

This system means that in a health emergency such as Covid the strong relationships between professionals and the people enable swift decisions to be made at both government and local levels, and the decisions can be quickly put into practice due to the trust built up by strong health education.

This structure is similar to that for disaster planning and preparation. Four years after the 1959 Revolution, Hurricane Flora caused 1,157 deaths in Cuba, leading Fidel Castro to declare “Never again…a Revolution is a force more powerful than Nature!”

The real experience of risk and disaster in Cuba then led to a building of resilience within society itself, built on local and national risk reduction structures, and annual simulation exercises, but also on strong continuing education in schools and communities among a highly literate population.

Community officers visit residents to establish and list who are most vulnerable. When disaster strikes, people know exactly what to do, and they do it.  As in health, the people of Cuba are its greatest resource in difficult times.

That this works is shown by the very low fatality levels experienced in Cuba in recent years even in the fiercest hurricanes. For instance, between 1996 and 2005, during the period of dire economic difficulties for the island, only 17 people died during eight major hurricanes. During Hurricane Wilma (six weeks after Katrina), which caused massive floods along the Cuban coastline, 640,000 people were successfully evacuated, with just one death.

What are the lessons for us in Britain? Of course, we have a capitalist, profit-led society, but the example of Cuba can teach us a great deal about how we could do better in dealing with the pandemic. A Daily Mail headline on October 17 proclaimed, “Why the UK should have followed the example of Cuba”!

Cuba has a public health system staffed by appropriate numbers of its own doctors and nurses, instead of stealing them from other countries who desperately need them. In fact, Cuba sends its medical staff abroad to help out in crises, as they did for Italy when Covid attacked in March.

The country is also largely self-reliant in medicines and medical equipment, unlike here when our “free market” system left government scrambling to buy in PPE from across the world. Cuba’s crisis preparedness puts to shame the short-sighted penny-pinching here, where the “Pandemic Preparedness Strategy” published in 2011 was subsequently largely ignored while austerity reigned supreme.

The creation of the NHS was a huge achievement by the British working class. Now that has been and is continuing to be undermined by a capitalist class putting profit above people. Faced with a health emergency, our government has largely mobilised the private sector. In Cuba, it is the people who have been mobilised to manage Covid through a practical, bottom-to-top tier collective approach across society.