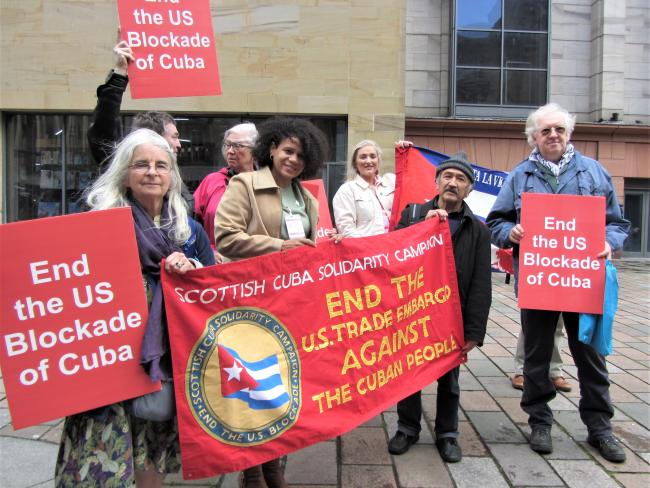 A welcome for the visitor from Cuba and a reminder of why she's here, Glasgow 25 May. Photo Workers.

Elizabeth Ribalta Rubiero from The Cuban Friendship Institute is on a speaking tour of Britain at the invitation of the Cuba Solidarity Campaign.

She is in Britain to give an update about the situation in Cuba as the country emerges from the coronavirus pandemic, including the impact of US sanctions and current relations between Cuba and the US.

The first meeting of the tour was in Glasgow on Wednesday 25 May, followed by eleven others across the country, finishing on 6 June.

In front of a large audience in Manchester on Thursday 26 May, Elizabeth reminded people of the well-established and “pathological” aggression and blockade carried out by the US for over 60 years as it attempts to destroy the Cuban economy.

She outlined the use of punitive measures against those across the world who dare to trade with Cuba as well as attacks on cultural and educational relationships. Medicines and medical equipment imports are routinely blockaded. But because of the investment in biotechnology and health in the country, Cuba has been able to control the pandemic and vaccinate its population.

On the other hand the blockade does have a visible and ongoing impact on availability of goods in shops. Joe Biden promised to lift sanctions during his presidential election campaign. But far from continuing the progress in US-Cuba relations initiated between Barack Obama and Raul Castro in 2014, Biden has continued the blockade and tightened it in several ways.

Elizabeth outlined the insidious role that social media is now playing in the attempts to undermine Cuba. A number of supposedly independent news agencies operate with backing from the US to the tune of $500 million in the last 20 years, paid through individuals and non-governmental organisations.

‘Incitement is aimed at young people.’

Much is this is aimed at young people through music or celebrity gossip channels and picks up on topical issues about gender and human rights. Miguel Diaz-Canel, the Cuban president, described the influence of these social media outlets as “ideological disarmament”. The events of 11 July 2021, when there was unrest in the streets of Havana, were blamed on incitement to violence on social media subsequently manipulated by mainstream media.

The response of the Biden administration was to immediately step up support for “dissidents” against the Cuban government, in the name of extending democracy. The previous month the US, supported only by Israel, voted against a UN resolution calling for an end to the U.S. economic embargo against Cuba – for the 29th time.

A challenge facing Cuba is that younger people are distanced from the origins of the revolution over time. Elizabeth related that it is difficult to explain, even to her own son, the positive achievements of the revolution. All he can see is the lack of food and resources. But Cuba will continue to fight to make sustainable progress, to involve its young people in what they think is wrong and what can change.