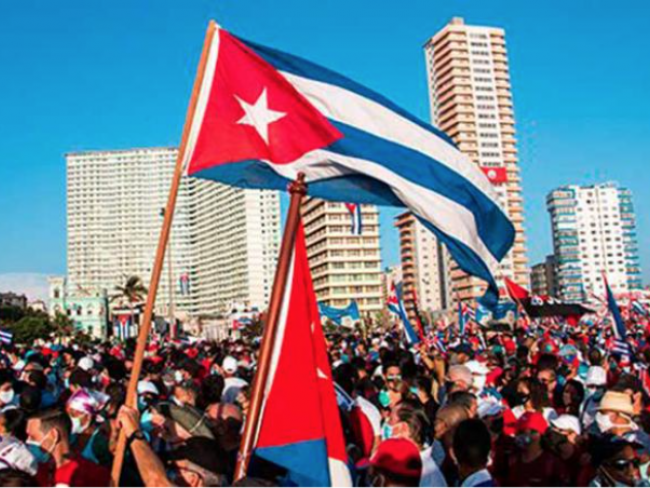 18 July demonstration in Havana in support of the Revolution. Photo Abel Padrón Padilla/Granma.

Protests in Cuba in the middle of July were hijacked by the CIA, promising money and political leadership to desperate people, said Radio Havana journalist Cristina Escobar at an online Zoom meeting held by the Cuba Solidarity Campaign on Monday (9 August).

The meeting was a timely opportunity to present an update of the latest situation in Cuba. Since Zoom is blocked in Cuba – by the company, not by the government – Escobar’s report from Cuba was given in a video recording.

Escobar explained there are real problems of food, electrical and medical shortages in Cuba. But, she said, these were due to the US’s recent harsh blockade measures (developed by Donald Trump and further enforced by Joe Biden) against the background of the Covid-19 pandemic and the absence of international tourism, a major component of Cuba’s economy.

Len McCluskey from the Unite union told the session that the blockade has cost Cuba billions of dollars each year. According to a speech to the UN in June by Cuban Foreign Minister Bruno Rodríguez Parrilla, losses in 2020 were $9.1 billion.

Grahame Morris, chair of the British All Party Parliamentary Group on Cuba, added that the US had devoted $17 million to fund counter-revolutionary activities, using agitators to rally for a violent “colour revolution” and instigate riots against ordinary Cubans (including damaging a children’s hospital).

“The vast majority of Cubans came out in support of the revolution.’

In response, said Escobar, the vast majority of Cubans came out in support of the revolution. Meanwhile, Escobar also reported, the Cuban state is revising its policies and correcting mistakes to help meet the needs of the people to the best of the government’s ability.

The US agenda of inciting counter-revolution has failed, Cuba’s ambassador to the UK, Bárbara Montalvo Álvarez, told the meeting. The country remains calm, and the Cuban government is doing its best to deal with the challenges with the support of the people.

The meeting also heard how mainstream media are biased, distorting and using second-hand information to push for a pro-US narrative. Ollie Vargas, a reporter from Kawsachun News, the English language service of the Bolivian peasant union radio station Kawsachun Coca, told the meeting that social media for the anti-Cuba campaign are mostly bots repeating slogans, propaganda and giving the appearance of “majority support”.

Reactionary forces in the US (especially in Florida) including Miami mayor Francis Suarez, are calling for a “humanitarian” intervention in Cuba, in other words, another violent unjust war – in fact, Suarez called last month for air strikes against the island. Escobar said that if people want to be humanitarian, they must push for the lifting of the blockade and for the real situation of Cuba to be presented to the world.