Skip to main content
Home » News/Views » The 5 are back again!

The 5 are back again! 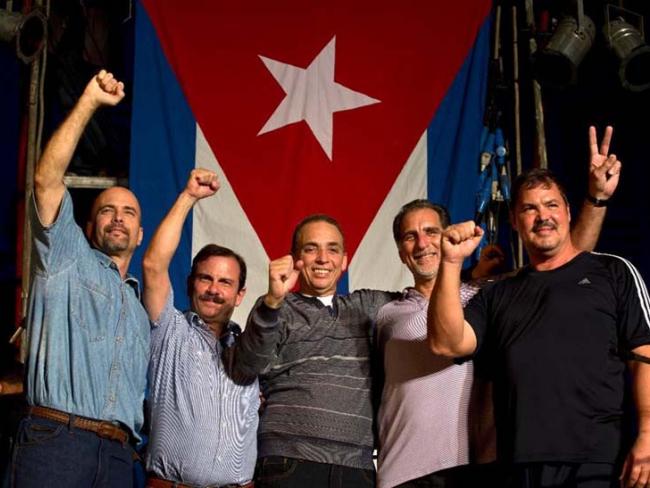 The Miami Five pose for the cameras on their return to Havana.

With all the Miami Five safely home in Cuba, we look at the background to this great victory…

The Miami Five are now all free and back home in Cuba with their families, after being released from US prisons by President Obama last December. To understand them and the relationship between Cuba and the US, we have to go back to the early post revolutionary era.

Following the Cuban revolution’s success on 1 January 1959, a number of people fled to Miami from Cuba. First to go were the most powerful and wealthiest of the deposed Batista regime and the Mafia who had run Havana as a giant casino and brothel. These were followed by the business elite, many of whom already had property in Miami. They assumed that this move would be temporary.

The CIA trained and armed groups of Cuban émigrés in Florida in order to create counter-revolution in Cuba. Known as Brigade 2506, they invaded Cuba at the Bay of Pigs in April 1961. It was a disastrous attempt to overthrow the revolutionary government. Although they were armed and transported by the CIA who supplied eight B26 bombers for the invasion, President Kennedy felt unable to give them air cover for fear of revealing US involvement. The revolutionary Cuban forces killed 118 and captured 1,202 of the attackers. Many more Cubans were killed.

Following this debacle, anti-Cuban terrorist organisations sprouted up in and around Miami. Funded and trained by both the CIA and the Mafia, there would be a number of attempts to bomb Cuban embassies and damage the Cuban economy.

There were two key figures among these groups. The first was Orlando Bosch, a CIA veteran and co-founder of the terrorist umbrella organisation CORU. He was behind the 1976 bombing of Cubana Flight 455, killing 73 passengers including the Cuban youth fencing team. As early as 1964 Bosch was arrested in Miami for towing a homemade radio-operated torpedo along a main road in rush hour. Two years later he would be arrested again for making bombs to drop on Cuba. In 1970, he was finally convicted, for firing a bazooka at a Polish ship docked in Miami port.

‘There would be a number of attempts to bomb Cuban embassies and damage the Cuban economy.’

While on parole, Bosch skipped the country because police intended to arrest him for murdering another Cuban exile. On the run Bosch carried out numerous terrorist acts aimed against Cuba in Venezuela and other Central American countries. Questioned in Costa Rica about a plot to kill Henry Kissinger, Bosch claimed that the target was the nephew of deposed Chilean President Salvador Allende.

Bosch was deported to the Dominican Republic where he plotted with Luis Posada, the second key figure. Posada. like Bosch, was a co-founder of CORU and implicated in the Cubana bombing. He was also the self-confessed instigator of the 1997 Havana hotel bombing campaign, which killed an Italian tourist. Posada too eventually went on the run after escaping from prison in Venezuela, where he had been jailed in connection with the Cubana bombing.

Bosch returned to Miami in 1987, where he was temporarily imprisoned for breach of parole. The US Justice Department challenged his petition to be allowed to stay in the country, as he was not a US citizen. The Cuban American National Foundation, (CANF), an umbrella group for all the counter revolutionary Cuban exile bodies in the US, lobbied for his release and right to stay in the US.

CANF was based on the Israeli lobbying body AIPAC in the US, but was considered more effective. President George H Bush was conscious of the need for votes for Republicans in Florida; he now joined the lobbying. Bosch was allowed to stay in July 1990. The Cuban Government, of course, was not amused. “We cannot [accept] the news of the release of Orlando Bosch, who is a terrorist,” explained a spokesperson for the Cuban Interest Section at the Swiss Embassy in Washington. Havana had no intention of waiting quietly for Bosch’s next attack.

On 8 December 1990 René González “stole” a light plane from an airfield on the outskirts of Havana and flew to Key West in the US. He was greeted by immigration officials and the FBI as the latest escapee from Cuba. But González, a veteran of the Angola war against South Africa, was also a Cuban intelligence agent.

Others took different routes to Miami pretending to be defectors. There were more than just five, maybe up to twenty. One of them, Juan Pablo Roque, told Workers in Havana how he had entered the sea in south eastern Cuba, wading and swimming through the mangroves, into the shark-infested waters and on into Guantanamo Bay US Naval Base.

Their target was to infiltrate Miami based terrorist groups in order to warn Cuba of any coming attacks. One main target was Brothers to the Rescue. Cubans also infiltrated CANF, Alpha 66 and a range of other terrorist outfits based in Miami. They were known in Havana as the Wasp Network.

The leader of Brothers to the Rescue was Jose Basulto, trained by the CIA in espionage, cryptography, infiltration, weapons and explosives. After the Bay of Pigs attempted invasion, he was infiltrated into Cuba to bomb an air base. He failed. In 1962, he machine-gunned the north Cuban coastline from a speedboat.

Basulto had acquired a small fleet of aircraft, launches and weapons. Brothers to the Rescue’s public mission was to rescue Cubans floating on rafts from the waters between Cuba and the US. Privately its intentions were somewhat different. Basulto was the pilot for its first mission on 25 May 1991. His co-pilot was none other than René González. Juan Pablo Roque was also recruited as another pilot. Once the US coastguard started to round up rafters and incarcerate them in Guantanamo Bay US base, Brothers to the Rescue no longer had anyone to rescue.

‘Cuba vowed that there would be no relations with the USA until all the Five were freed.’

Nobel prize-winning Colombian novelist Gabriel García Márquez was due to visit the US in April and May 1998. His itinerary included a meeting with one of his fans, President Bill Clinton. He was asked by his good friend Fidel Castro to take a file to Clinton. It contained all the information including names, dates, weapon stores, plots and terrorist actions carried out by CANF, Alpha 66, Brothers to the Rescue and so on. The file was a compilation of the work of the Wasp Network.

Cuba had previously sent information about the terrorist activities of Alpha 66 to US authorities, but nothing had happened. The Cubans thought that García Márquez’s direct access to Clinton might yield more success in stopping the criminal activities of the Miami groups. Clinton opened a back channel and the FBI sent a delegation to Havana to meet with Cuban State Security in June 1998, an unprecedented move.

The FBI promised to consider and analyse all the information it was given, and respond. There was no reply for three months. Then on 12 September five members of the Wasp Network were arrested. They were René Gonzalez, Antonio Guerrero, Gerardo Hernández, Ramón Labañino and Fernando González, who became known as the Miami Five. They were held in solitary confinement for seventeen months and then given long sentences ranging from 15 years without parole to double life sentences. René González and Fernando González in April 2013 and February 2014.

Cuba vowed that there would be no relations with the USA until all the Five were freed. President Barack Obama eventually decided that it was time to develop relations with Cuba because the US blockading policy had failed. He held secret discussions with President Raul Castro. It is hardly surprising that the demand for the release of the Miami Five was on the table as a first priority.

On 17 December 2014 the remaining three of the Miami Five were freed, allowing Cuba and the US to talk about the opening of embassies in each country. Cuba is under no illusions about the developing of relations between Cuba and the US. It has specified that the opening of embassies depends on US assurances that their diplomats will cease attempts to overthrow the Cuban government.

Developing further relations is dependent on shutting the Guantanamo US Navy base, returning the occupied land to Cuba and ending the 53-year blockade of the island. Raul Castro has said there is no question of Cuba changing its socialist system. He has also indicated that Cuba requires reparations for the damage caused to the economy of Cuba and the lives of its citizens.

As Cuba enters its 56th year since the revolution, Cuba has good relations with the whole of Latin America and the Caribbean, Canada, Asia, Russia, China, Africa and Europe. So it’s the US that’s isolated and not Cuba.